Irish around the world will celebrate St. Patrick’s Day on Wednesday.

My siblings and I knew that dad emigrated from County Kerry, Ireland. His insistence that we wear green on St. Patrick’s Day was far more than a hint. One of dad’s quirks was asking teenagers: “What county does your family came from?” Many a clueless youth came in for an informative talk.

He was an early model of an Ancestry.com sales pitch.

For a second year in a row, the terrible COVID-19 pandemic forced cancellation of Northampton’s historic St. Patrick’s Day breakfast. Every year, parade workers and Irish activists were honored.

Breakfast tickets usually sold out at the Hotel Northampton or the Hilton. Wise planners would buy a whole table, ensuring seats for family, friends and lucky pleaders.

Ten years ago, I had the rare honor to be guest speaker at the city’s Saint Patrick’s Parade Association 31st annual breakfast at the long-gone Clarion Hotel. To say the 2011 breakfast was popular is an understatement. Drivers had to rise early to find a paved parking spot. Latecomers risked life, limb and footwear as they resorted to muddy fields nearby.

It was important for Irish movers and shakers to appear in person. Not showing up risked your visibility, maybe even standing. Dad never missed. Well-suited men sported a green flower buttonhole. The ladies wore favorite dresses. A few of them added light-up costume jewelry proclaiming love for Ireland. Shamrock plants graced the tables.

The Gazette sent a reporter to quote the jokes, and a photographer to record the crowd. My beautiful white-haired aunt, Theresa “Tess” Collins, was featured most years including her last, 2019.

It was a gathering of Hampshire County’s resident clans; hungry diners monitored the buffet’s arrival.

I just found a copy of the 2011 breakfast’s agenda stating “Times are an approximation:” 8:15 MC Flaherty loses arm-wrestle clash with Father John Connors, who then gives the Invocation. More lies: 8:25 MC Flaherty introduces Jim Cahillane. The event ended at 9:00 A.M. sharp, so people could get back to work.

WHMP Morning Show host Bob Flaherty was my big day’s master of ceremonies, adding Bob to a fine list of local MCs with a sense of humor. Flaherty habitually claims we are old friends because long ago he worked at our family’s former automobile dealership. Memory fails me, but I hope it was in sales because Bob makes his living as a world-class talker. At one point he ran out of breath; did my introduction loom?

Nope, stalled again as he told stories, recognized office holders, then his myriad friends in the audience, plus the head table. In shy contrast, I had my speech ready, nerves tingling. Three times I edged upward, but no go. I was shaky from a whole year of surgical post-op. Quivering; I finally rose to tell a few jokes and plug my book: “On History’s Front Steps.” A bracing laugh came to my aid when I commended the audience for comprising the Valley’s largest poetry reading ever — adding ‘Take that Amherst!

The late Bill O’Connor was a popular MC up and down the Pioneer Valley. Bill was in high demand for his endless font of jokes and matchless delivery. Laughing as he spoke, his fans were in stitches before Bill’s punchline. Whether in his beloved Northampton, in Holyoke or Greenfield, Bill knew the players, their foibles and soft spots.

Crowds smiled contagiously when Bill held up his one-sheet agenda, saying, ‘It felt like the Saturday Gazette.’

In 1983, Shergar, an Irish racehorse, owned by the Aga Khan, was kidnapped for ransom but disappeared. The stallion won England’s 1981 Epson Derby by a record ten lengths and was priceless. Amazingly, Bill O’Connor revealed to that year’s Parade Breakfast that he’d found Shergar. As he spoke, in walked a Pantomime horse with two jokers inside. It brought the house down!

In closing, I related my dad’s gem from a Boston St. Patrick’s Day breakfast. Its MC, Governor’s Counselor Sonny McDonough, was fearless. Sonny, to rising laughter, confided that (diminutive) state Senate President John Powers was about to sue the city of Boston for “building the sidewalks too close to his ass!” I dropped Bob’s mic at 9:05.

A healthy and Happy St. Patrick’s Day to all, and many more. 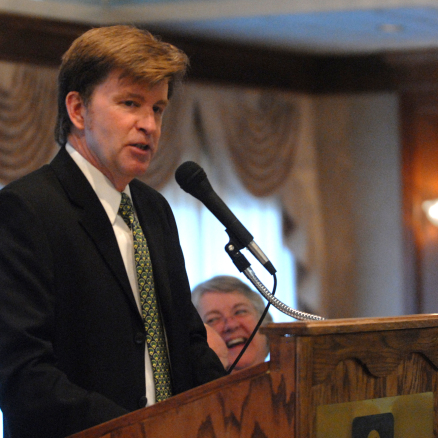 View all posts by dadmin